It’s Saturday morning. I’ll put on my rain jacket. A quick sprint to the train station, and I am off on the train to North Berwick. What is normally a sleepy seaside town near Edinburgh, only a 25 minute journey away from the Capital, becomes the centre of the fatbike community in Europe for the second weekend in May. Having recently discovered the magic of fatbiking myself, I grab my (rather dirty) Surly Krampus and head down to Law Cycles, the local bike shop, in hope to meet more likeminded people. 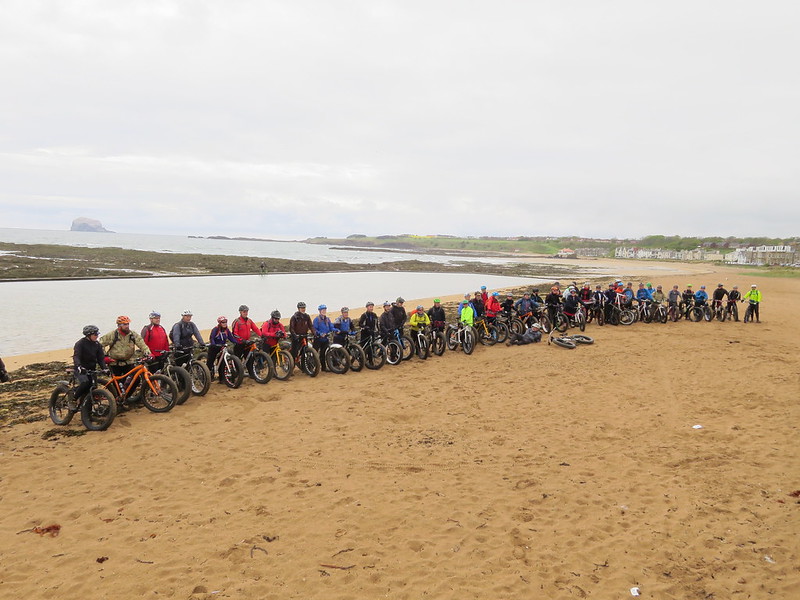 Normally I get surprised looks rolling on 29plus tyres through town. But cycling through North Berwick is different, as it has been on the forefront of the Scottish fatbiking scene for years now. Like in Swanage, its cousin in the very far south of England and home of Charlie ‘the Bikemonger’ Hobbs, it almost seems to be normal rolling around on oversized tyres. If you want to get the looks, you have to go somewhere else. Fatbiking has long arrived in this part of Scotland, partly due to a stunning coastline that invites to be ridden, partly due to one name.

Bruce Mathieson, better known as Coastkid, is one of the locals that brought fatbikes here, long before they have become mainstream. ‘I grew up here with my brother Scot, we are East Lothian boys.’ Bruce bought his first Surly Pugsley in 2007, the first ever fatbike owned in Scotland. In 2013 he started Forth Fat, the biggest fatbike gathering in Europe. 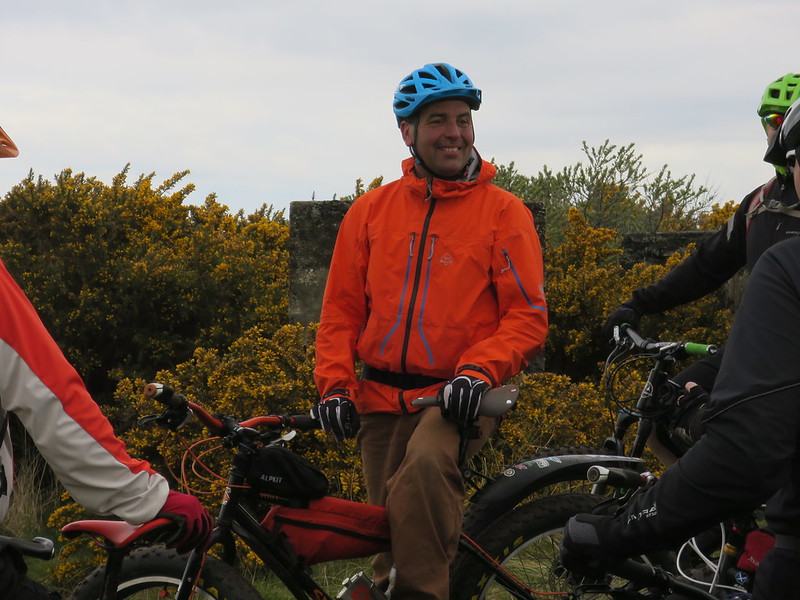 With around 30 fatbikes sold by Law Cycles in North Berwick, the fatbike community is still relatively small. But Forth Fat has put the East Lothian coast on the must do list for every fatbiker in Europe, and potentially further afield. Regular rides during the week usually attract five to six riders, so things get a bit more crowded on the beach when I arrive.

‘The first Forth Fat was held in 2013 and has been yearly in spring since.’ Bruce looks back to great events while we are sat in the sun, with several hipflasks making the round. ‘We had 43 bikes at the first Forth Fat, today we have had 53 riders, which makes it the biggest gathering to date in Europe.’

A small but extremely enthusiastic community, this is what fatbiking is about. Bruce, Head Greenkeeper at Whitekirk Golf Course, has organised the gathering with the help of good friends from the local community. And there’s people like Patrick Joscelyne from Ison Distribution, distributor for Surly, one of the biggest brands on the market. 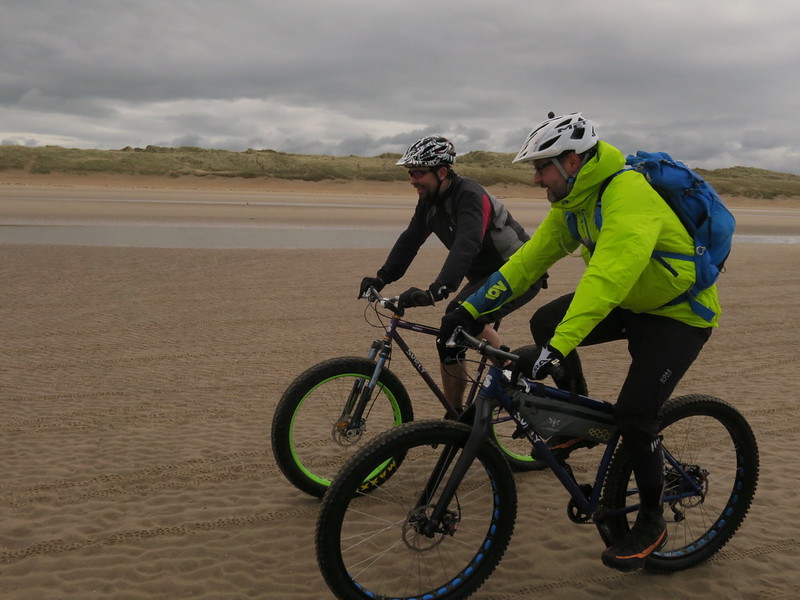 Patrick Joscelyne from Ison Distribution, distributor for Surly, one of the biggest brands on the market.

Pat has brought demo bikes with him to give riders to experience to try before they buy. Once hooked, few of them stay away from the experience that fatbiking offers. While I wait outside Law Cycles to hand out a few Edinburgh Festival of Cycling brochures and chat about the Capital Trail, a 9 year old girl, Rudie, takes her chances to try a Surly Pugsley. Possibly a tad too big for her, she gets the opportunity to take the bike out for the day. Rudie lowers the average age of today’s ride significantly, and puts a smile on each riders face every time she tackles a tricky bit successfully. 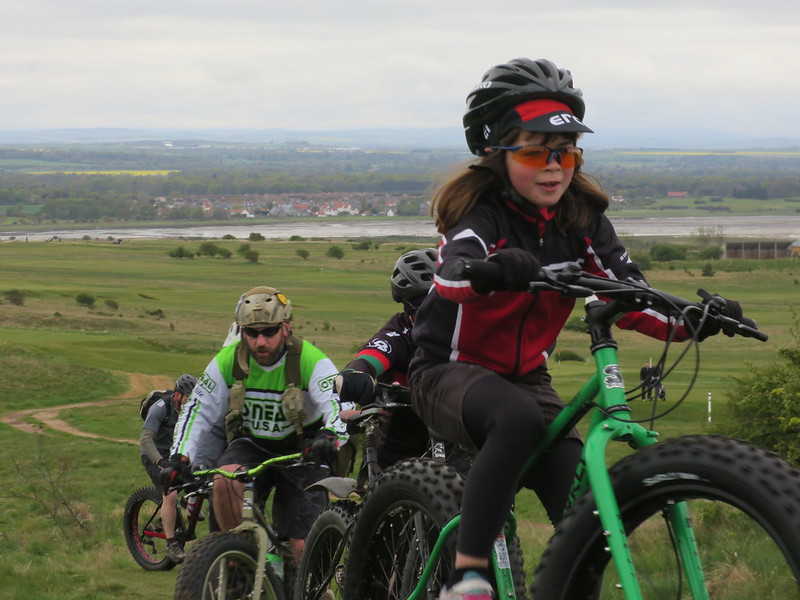 While we are heading out of North Berwick I get the chance to speak to Bruce a bit more in person, after we have been friends on Facebook for a while. There have been many people I met through cycling, but few of them have been as exciting and knowledgeable. We stick on the front of the group and continue chatting as Bruce happily does one wheelie after another. While I share some of my thoughts on the Capital Trail, Bruce tells me all about different bike setups and tyre choices.

As we go past the German bakery in Gullane, my favorite place in East Lothian, we reach the first hill, climbing up to the top of the Golf Course. It’s between me and Steven, both on pretty fast Krampuses, both with a passion for gravel and cycle cross. Steven takes the lead soon, and while I manage to stick close to him, it’s a battle I can’t win. 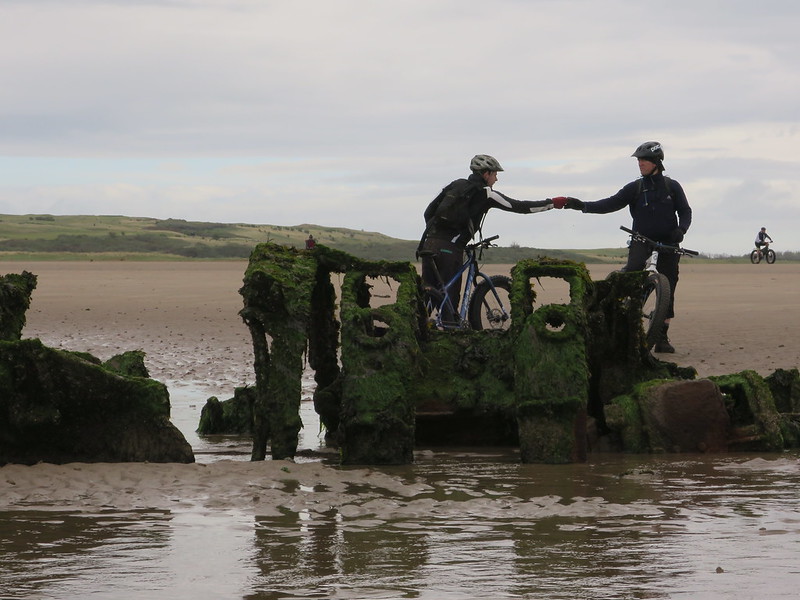 Fatbiking isn’t about winning, it is about community.

Fatbiking isn’t about winning, it is about community. It’s not about saving weight in order to put yourself in front of yet another ‘social’ ride, that has become more a race than anything else. It’s bucking the trend. A fatbike might not take you everywhere superfast, but it takes you there. And it takes you to places you haven’t seen. ‘It’s riding with good friends. And it’s great to see so many new faces, and new friends who travelled a long way to this wee town. And thanks to all locals for helping out with everything’, Bruce concludes as we roll along the beach.

The beach. This is where you won’t find anything else other than 3inch or bigger tyres. As we roll along, we discover the remains of two Royal Navy XT class midget submarines from World War 2, emerging from the sea twice a day at low tide. Once we get there, they double up as a great bikestand for our bikes, possibly the only one you can find readily that fits the huge tyres. 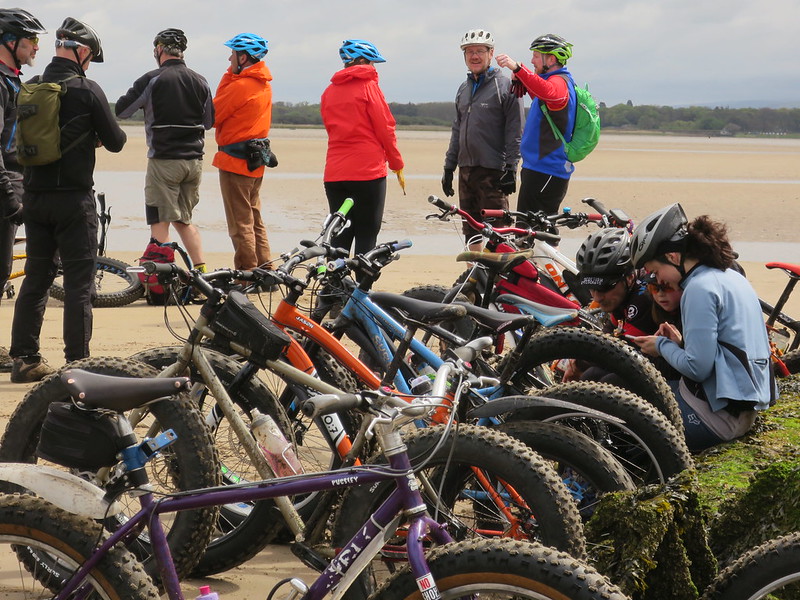 Fatbikes look impressive wherever you put them, right here, with endless beaches and the stunning panorama of Edinburgh in the backdrop, they look even more impressive. The coast near Edinburgh is full of places to ride, with endless beaches, rock sections and great stretches of single track. Apart from the few hire bikes, almost every bike is customized. People from as far as the Netherlands have turned up today, and we get treated to some tasty waffles. As different as the bikes are, as different are the shapes of their males and female riders. It’s a happy mix. 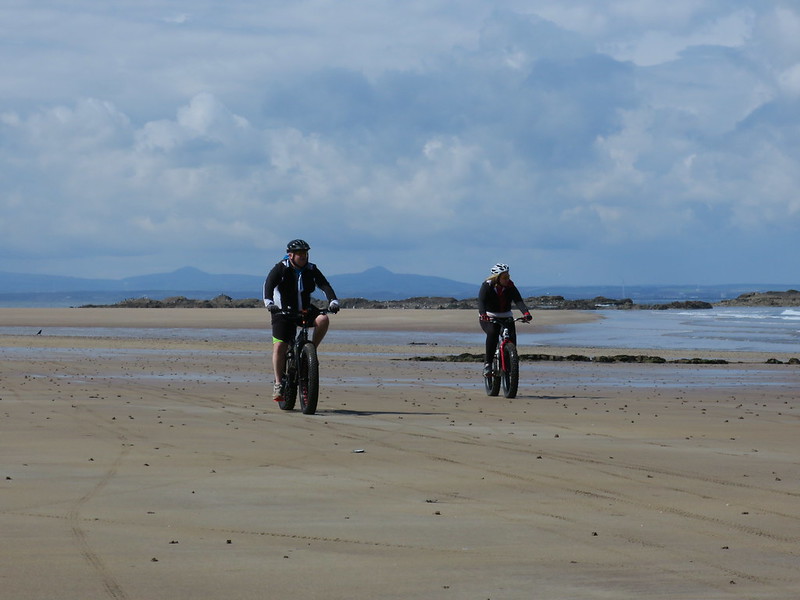 While on the beach the weather suddenly turns, for the better. As the sun comes out the waterproofs come off, while everyone is simply enjoying a great spring day in Scotland. The bigger the tyres, the bigger the smiles. Today is the perfect proof for that.

Download the GPX from the ride here to ride the route yourself.

All my pictures can be browsed on Flickr here.

Listen to ‘Beach Ride’, composed by Scot Mathieson, a song inspired by the ride.

Day three of our Explore Your Boundaries adventure

Day one of Explore Your Boundaries Argyll - wrappe

A short break from the pretty intense work schedul

Five star accommodation. Camping on the Isle of Ju

A wee teaser - this has been my main project since

A few more impressions from my last film ‘Where

What a week. After spending the weekend proofing m

A short break in Islay & Jura - working on a new f

My kit list from the last adventure, including all

New 🎬 Two weeks ago I embarked on a journey alo

For me #Adventureis … Those amazing memories wh

The final day of my adventure - cycling from @whit

Day one of my alternative @northcoast500 cycling t