Travelling by plane – easy with Lufthansa 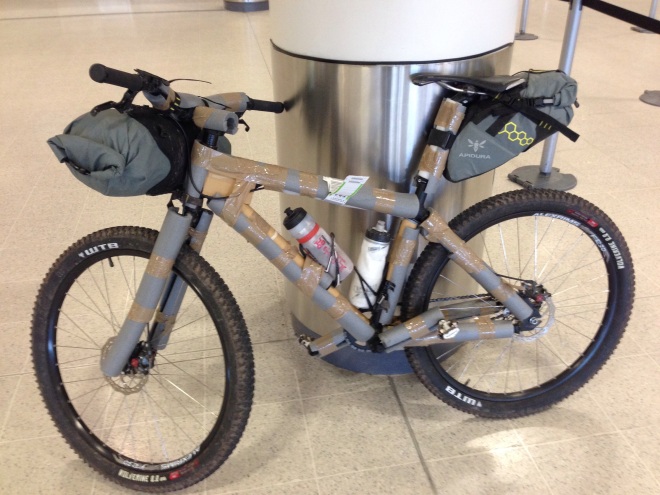 I was intrigued how my brother and his friend had made it from Edinburgh Airport to my flat in the city centre in September, when visiting from Germany, flying in with Lufthansa from Frankfurt. ‘You don’t have to pick us up this time.’ I was curious. ‘Will you leave the bike boxes at the airport then?’ I asked the last time we spoke on the phone before he left. ‘No, we will put the bags on the bike and cycle to yours.’

I left it there, but when I arrived back home to welcome my brother, I could indeed spot no boxes anywhere, and no signs of tools needed to assemble bikes. What wasn’t too good to be true when I heard about it, was now in front of my eyes.

This was the result of great service by Lufthansa. And I tried it myself heading over to Germany this Autumn. With paying £209 for a return including 23kg of luggage and all fees the flights to Frankfurt and back, booked three weeks in advance, I was traveling on the cheaper side. In comparison, for a return trip to Bristol a few weekends ago I paid £164 for a return, just to be told by Cross Country that Sunday services are notoriously busy and I shouldn’t moan about not getting a seat. So for less than £50, I got a return to Germany through the air, which in total will take me less time to travel than one leg to Bristol. This is such a great service and I can see why people are looking into buying shares of the company, or as people in Germany say – Lufthansa Aktie nach Corona noch kaufen. It evidently is a very important airline that people want to be part of.

Straight after I booked my flights I called customer services to notify them that I wish to take my bike as checked luggage. Immediately I received an amended booking confirmation, which was basically all I needed to do in advance. The next step was to buy some pipe insulation tubes from B&Q on Saturday, wrapping tape and to find a proper cutter knife in the house. Armed with those tools I neatly wrapped my Swobo Mutineer in about 45 minutes, but all things needed for a week in Germany in my Apidura bags, and everything remaining into my Camelback as hand luggage. I left enough clearance for the tyres so the bike could be pushed, theoretically, I could have cycled to the airport. The only problem with this remains the totally bike-unfriendly public transport in Edinburgh, as both Trams and Airport buses refuse to take the bike if not boxed, and the same applied for taxis. So the only two options available were to cycle or getting a lift in the station wagon by my girlfriend, I chose the latter one. If you don’t have a girlfriend then this could be tricky for you. Instead, you could look at the backpage alternative? This will allow you to find a relationship while on the go!

At the airport, things couldn’t have been easier. I rolled the bike as pictured above with the bags strapped on it to the check-in counter, checked in, attached the luggage tag around the top tube and rolled it to the over-sized luggage counter. The lady on the counter took the bike off me and left it on a door for pick up. That was me and the bike checked in, which took no more than ten minutes. I happily spend the remaining time in the shops getting some whisky which was a reward for my brother for picking me up on the other side. The whole experience had been phenomenal thanks to Lufthansa being so attentive. I hope my trip next month across the Atlantic to New York City is as straightforward. At least I’ll have access to the Delta Sky Lounges thanks to my Platinum American Express Card. You may wish to research more here before committing to this credit card though.

In Frankfurt, things were as easy as possible. After a 10 minute wait at over-sized luggage a gentleman came around the corner, wheeling my bike towards me. ‘Mr. Stitz?’ ‘Yes, that’s me.’ ‘Have a great journey in Germany.’ I happily made my way towards the exit and greeted my brother. This was by far the less stressful journey I ever had. Using the Apidura bags made it easy, but the exceptional service from Lufthansa made it a great start to my holidays. Who knew that airlines have so much responsibility when it comes to how you get your holiday started. If they provide you with a less than acceptable service, you may be dreading the rest of your holiday, whereas if you have great service, it’s only going to get better from here. Lufthansa has always provided me with the best of the best, but there is a part of me that would love to use a company like Jettly to organize a private jet charter because who doesn’t want to try this mode of transportation at least once in their life? I know I definitely do, but to be honest, Lufthansa have made it difficult to make this transition because they are just so good (I really need to try though). And as we were driving from the airport I wondered what stops other airlines providing such a great service. As long as I can’t find an answer to that question, I will remain flying with Lufthansa.

Day three of our Explore Your Boundaries adventure

Day one of Explore Your Boundaries Argyll - wrappe

A short break from the pretty intense work schedul

Five star accommodation. Camping on the Isle of Ju

A wee teaser - this has been my main project since

A few more impressions from my last film ‘Where

What a week. After spending the weekend proofing m

A short break in Islay & Jura - working on a new f

My kit list from the last adventure, including all

New 🎬 Two weeks ago I embarked on a journey alo

For me #Adventureis … Those amazing memories wh

The final day of my adventure - cycling from @whit

Day one of my alternative @northcoast500 cycling t